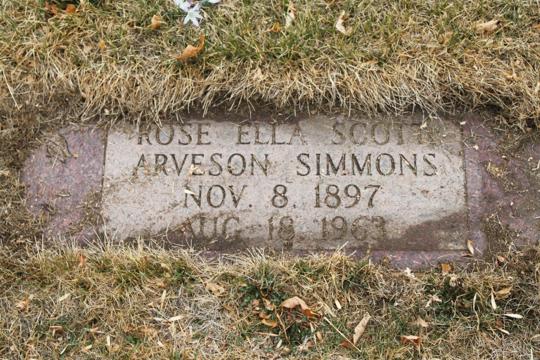 Side Streets readers are the best. When you ask for information about a woman who, legend has it, met Christ in her living room and was responsible for miracle healing roses, you get a huge response.

Of course I’m talking about Rose Ella Scott Arveson Simmons, or “Little Saint Rose” as she came to be known after her death in 1963 at age 65.

Her legend grew as her daughters, Dorothy and Pauline, transformed the family home at 3540 W. Pikes Peak Ave. into a chapel, shrine and statue garden to honor Rose. They welcomed pilgrims worldwide with an offer of hope and free miracle, healing roses like ones they said had been resurrected after being laid on Rose’s casket.

I uncovered a little of the history of Rose and her daughters as well as her first husband, Edward W. Arveson. But I knew little of her life or her second husband, known only as Simmons.

That’s where readers came in, filling in gaps and maybe even explaining her vision of Christ in 1936.

“They wore black hats and veils when they came to Mass,” Shoemaker said in online comments.

Another online comment, from Pat Musick, recalled the early days of the shrine.

“Each Easter season for the first several years after it was built, the statue of Christ was clothed in a purple robe,” Musick wrote.

But I learned tons from readers Linda Vixie of the Pikes Peak Genealogical Society and reader Angela Klaassen.

They mined the Penrose Library’s Special Collections and records including U.S. Census data and city directories at Ancestry.com for nuggets about Rose and her family.

Here are the highlights found by Linda and Angela:

Rose was from Story County, Iowa, where her parents stayed the rest of their lives. She was 16 when she married Edward Arveson. 21, son of immigrants who lived in Iowa but moved to Colorado. Over the years, his mother, Nettie, worked as a nurse at the El Paso County Poor Farm and then as a servant and cook.

By 1920, Rose and Edward had settled in Colorado Springs where he was a sign painter, a trade he would practice for decades.

Daughter Pauline was born in 1926 and Dorothy in 1930. Edward’s sign business is successful enough he bought a display ad in the City Directory. By 1931, they bought the house on West Pikes Peak.

Both Linda and Angela found an interesting entry in the Evergreen Cemetery directory: In September 1936, Edward Wallace Arveson Jr., son of Rose and Edward, was born, lived 13 days and died.

“I wonder if there’s a connection,” Linda said in an email.

The armchair psychologist in me agrees.

The last time Edward Arveson Sr. is listed at the home is 1943.

In 1946, Rose appears as a widow and working at a laundry. Pauline is a waitress. By 1948, Dorothy is a drug store cashier and Pauline a maid. Edward was living downtown and painting signs.

In 1951, Rose married Floyd Simmons, a washman whose family homesteaded in El Paso County in 1920. It was a short marriage, ending around 1956 when Rose again appears in directories as a widow even though Simmons was listed as a watchman at the Colorado School for the Deaf and the Blind.

Linda found newspaper interviews with Dorothy who said Simmons was abusive to Rose. He remarried in 1964, a year after Rose died, and he died in 1985 after spending his later years at the Colorado State Veterans Center in Homelake, where he is buried.

Another curious footnote is a listing of Rose’s occupation as a special deputy sheriff late in her life.

Finally, in October 2014, while walking to lunch downtown, I was stopped cold at the sight of an old yellow sign painted on a red brick building.

The historic “Aldridge Mercantile Co. Wholesale Grocers” sign is on the side of Old Town Bike Shop at 426 S. Tejon St. In the bottom right corner is the signature “E.W. Arveson.”

For a second, it spooked me.

E.W. Arveson was Edward Wallace Arveson, sign painter and husband of Little Saint Rose and father of Dorothy and Pauline.

He and Rose, also of Iowa, rented a house on East Pikes Peak Avenue in 1920 and later bought the house where Rose claimed an apparition of Christ.

Edward and Rose eventually divorced. Edward continued to work as a sign painter for many years, census records show, and was living in a nursing home when he died in 1980 at age 88, according to his Gazette obituary.

He is buried in Evergreen Cemetery in an unmarked grave in the “county block” where the poor are laid to rest.

City directories show Edward living downtown and working as a sign painter in 1948. Curious about the Aldridge Mercantile, I did a little research.

Turns out the building was built in 1903 and served as a livery stable. In fact, a 2004 inventory of historic buildings identifies it as the South End Boarding & Livery Stable. The same survey also identifies it as the Meyer-Collins Motor Co. and the Arapahoe Food Store.

I think I’ll spend more time walking during my lunch hour. I never know what kind of history I might stumble upon. 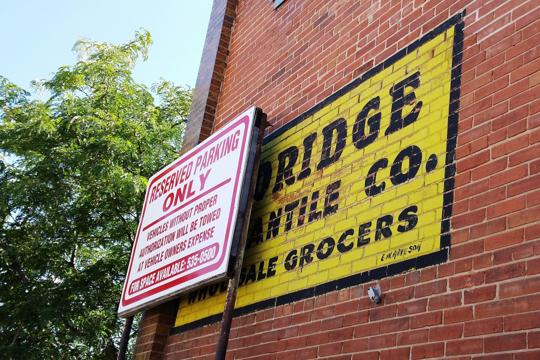