SIDE STREETS: Good read about a bad time in Colorado Springs

In January, I stumbled upon a display at a small museum honoring Ron Stallworth, who became the Colorado Springs Police Department’s first black detective in August 1975 and three years later infiltrated the Ku Klux Klan as a card-carrying member.

Did I mention Stallworth, now retired in Salt Lake City, is black? 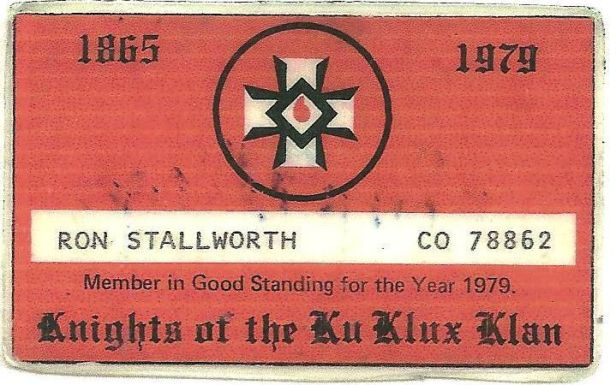 The display is in the African-American Historical and Genealogical Society of Colorado Springs in the Westside Community Center.

It was startling to see a copy of Stallworth’s membership certificate in the Knights of the Ku Klux Klan, dated Jan. 19, 1979, next to his Police Department identification badge with a photo of the obviously black CSPD detective.

Though I had heard of Stallworth’s infiltration of the Klan, I didn’t know the whole story.

Now, Stallworth fills in all the details in a new book of how, as a 25-year-old cop, he pulled off his historic feat. “Black Klansman” is a 180-page paperback, published by Police and Fire Publishing of Santa Ana, Calif., filled with photos and documents that he collected during his five-month investigation and infiltration of the Klan. 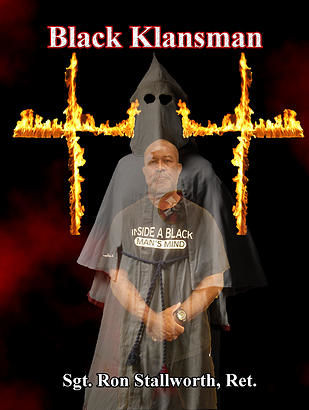 Not only did Stallworth persuade local Klansmen to grant him membership, he spoke on the phone with Grand Wizard David Duke and met him during a Klan recruitment trip to Colorado when Stallworth was assigned to serve as his police escort.

In his book, Stallworth, 60, takes the reader back to 1972 when, at age 19, he joined a police cadet program designed to recruit minorities into the Police Department.

He recalls white officers commonly referring to blacks as “toads.” And they frequently used the “N” word in his presence. A couple even referred to him as “boy” and subjected him to bigoted treatment. At the time, he was the only black on the force, and he was on probation, making it impossible for him to respond or fight back.

For example, when he was issued a police cadet uniform, the lieutenant in charge gave him a hat several sizes too small, telling him to cut his hair to make it fit. Stallworth wore it anyway, perched atop his Afro, until the police chief saw him on the street, asked him about it and ordered the lieutenant to give him a hat that fit him properly.

On his 21st birthday on June 18, 1974, Stallworth was sworn in as a commissioned officer and pushed to become the department’s first black detective. His big break came in April 1975 when he was assigned to go undercover and attend a speech by Stokely Carmichael, a civil rights activist who became famous for urging blacks to assert their “black power” as a leader of the Black Panther Party. 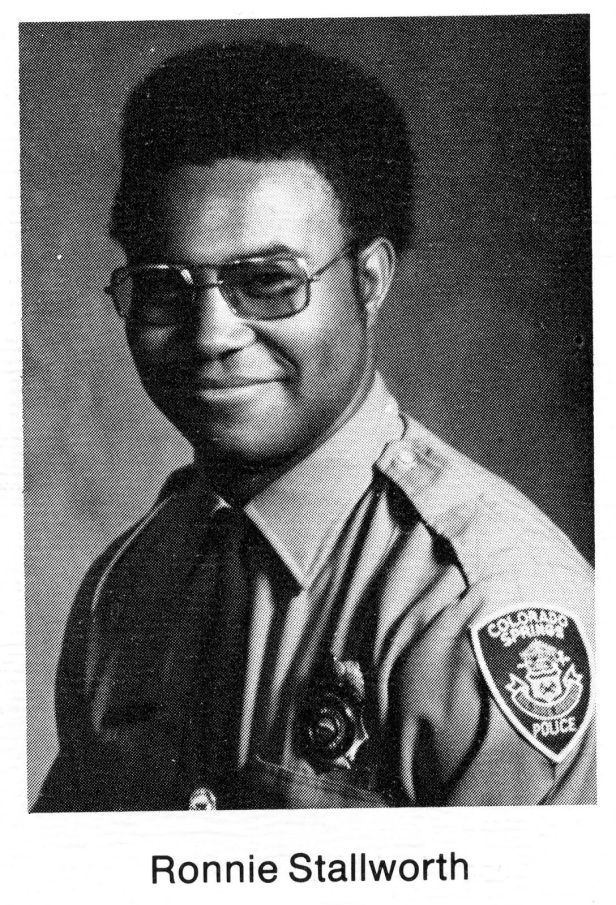 Carmichael was considered a dangerous revolutionary by the white establishment, and police officials, fearing he might spark violence, wanted a presence at his speech.

Stallworth wore a wireless microphone and attended the speech at a nightclub on East Las Vegas Street, conducting surveillance of the crowd and Carmichael. After the speech, Stallworth shook hands with Carmichael and asked him if he really believed a race war was inevitable.

Stallworth said Carmichael pulled him close and whispered: “Brother, arm yourself and get ready because the revolution is coming and we’re gonna have to kill whitey. Trust me, it is coming.”

It’s one of many chilling anecdotes in the book, which paints a vivid picture of the climate in the United States after years of anti-war protests, race riots and conflict from the struggle to end segregation.

Stallworth’s work at the Carmichael speech led to his appointment in August 1975 as a detective in the narcotics division. It would be three years before he embarked on his most famous undercover work.

It fascinated me to learn that his infiltration of the Klan was more a fluke than a well-orchestrated police effort.

And it began with a huge mistake.

Stallworth had answered a classified newspaper ad offering information about the Klan. Anyone interested could simply write to a post office box. Stallworth noticed the ad during routine scanning of the daily papers.

Curious, Stallworth responded with a note describing himself as a white man interested in the Klan and furthering the cause of the white race.

Then Stallworth did something that even shocked himself. He replied using his real name. He also included an unlisted telephone number in the narcotics office used by detectives in investigative work.

“Why did I sign my real name to the note which launched an official investigation?” Stallworth asked himself in the book. “Like all of our undercover investigators, I maintained two separate undercover identities with the appropriate support identification.

“So why did I have this lapse in judgment and make such a foolish mistake?”

Remember, this was October 1978, long before individuals could easily be Googled and phone numbers traced and identities quickly discovered.

Still, it left him vulnerable to being discovered.

Stallworth said he never believed anything would come of the Klan inquiry.

He couldn’t have been more wrong.

Within two weeks, on Nov. 1, 1978, he got a phone call on the undercover phone line from a Fort Carson soldier who was the Klan’s local organizer. Stallworth recalled how he convinced the recruiter he was a good candidate to join the Klan.

“My sister was recently involved with a n—– and every time I think about him putting his filthy black hands on her pure white body I get disgusted and sick to my stomach,” Stallworth wrote of the conversation. “I want to join the Klan so I can stop future abuse of the white race.”

The recruiter was impressed.

“You’re just the kind of person we’re looking for. When can we meet?”

It’s impossible to believe Stallworth could pull off today what he accomplished with relative ease then. He established a relationship with Klansmen over the phone then sent a white colleague as a stand-in for meetings. 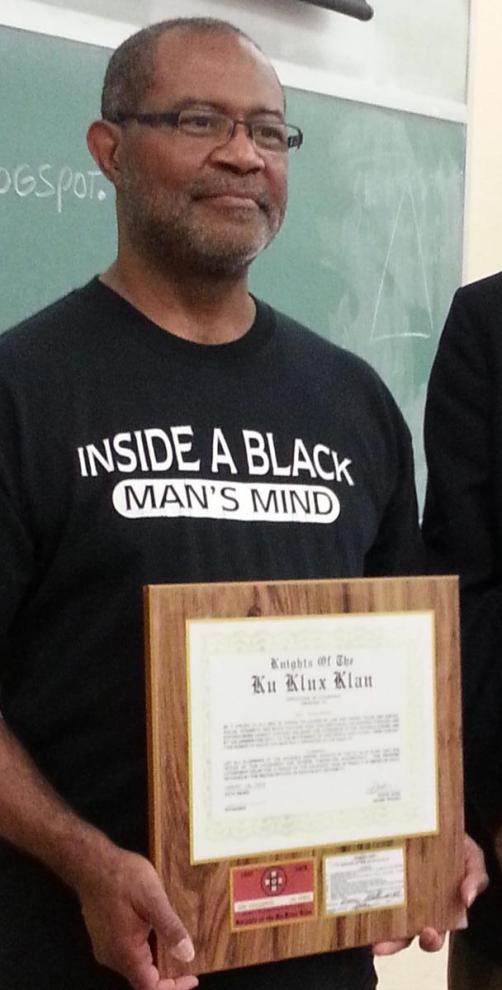 The book goes into great detail about the local Klan members and Stallworth’s interactions with Duke as well as groups fighting racism. There were cross-burning activities that he thwarted and links uncovered between the Klan and other white supremacist groups including the Posse Comitatus and American Nazi Party.

The investigation ended abruptly in April 1979 when the police chief ordered it shut down and all records destroyed.

Stallworth eventually left the department, keeping his secret until 2005 when he retired from the Utah Department of Public Safety and he told the Deseret News of his Klan investigation.

Now, he tells the rest of the story. The book is available for $24.95 online at www.policeandfirepublishing.com and other book outlets.

Do graduates, my children, appreciate the enormity of their accomplishments?

Heard about the black cop who infiltrated the Ku Klux Klan? It was a Side Streets column!